You may have seen images of an entranced person lightly walking barefoot across a bed of red hot coals without a single blister. Perhaps you’ve heard about how a hypnotized person sitting quietly in a chair can feel no pain when a needle is stuck into his arm. The person may even have his eyes open and be watching the process. This is the type of phenomena often associated with trance and other altered states of consciousness.
For several hundred years Western thinkers have distrusted these states. That view may be changing. At present there are neuroscientists, physicists, psychologists and psychiatrists, medical doctors, and parapsychologists are all trying to understand how these types of phenomena work and whether or not the have value.
An altered state of consciousness (ASC) is generally defined as any mental state that is perceived by an individual, or an observer, as being significantly different from ‘normal’ waking consciousness. These ASCs may range from ordinary day dreams to experiences of mystical ecstasy to near death experiences. (see graph) A person can tell if he is in an altered state by any of the following signs: alterations in thinking, disturbed time sense, loss of control, changes in emotional expression, changes in body image or sensation, and perceptual distortions. 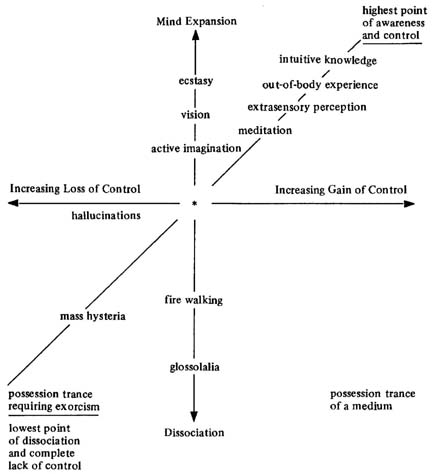 Ruth-Inge Heinze has graphed some ASCs onto two axes: mind expansion or dissociation, and gain or loss of control. From ‘Trance and Healing in Southeast Asia Today’ 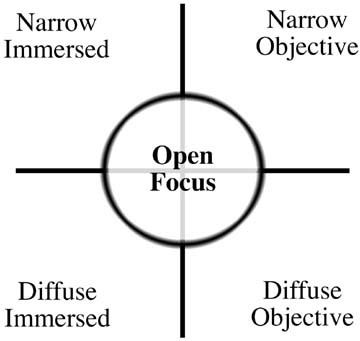 This graph shows a common attention style in each corners and Dr. Fehmi’s
Open focus state in the center allowing equal access to all modes of attention.
Copywrite Dr. Les Fehmi - 1998 - http://www.openfocus.com

Fehmi believes that the way we pay attention is important. If someone is always in narrow objective focus they will start to experience stress, regardless of the content of their attention. (see graph) Fehmi was chronically in narrow focus; that is why he experienced such a profound breakthrough. He finally ‘gave up’ and went into the open focus state. Consideration of our society’s chronic narrow focus may help us to explain our society’s rampant drug use and fascination with meditation and ecstatic spiritual states. These methods help us alleviate the tension of remaining chronically narrow focused in our ‘consensus trance’.
The relief that comes with altering our attention and our consciousness is more than just feeling good. Fehmi’s open focus, hypnotic trances, and other ecstatic states have been shown to bring about the remission of many stress related symptoms, chronic pain, insomnia, even eye and skin disorders. People who have been the most narrow focused may experience the most profound results. With practice most people can experience lasting changes.
Though many of these changes are subjective and hard to measure, some studies are showing how our attention may physically change the brain. Susan Greenfield has shown how the hippocampus’ in London taxi drivers were enlarged proportionately to the length of their employment - possibly related to their remembering abilities. She also noted a similar study where just practicing five finger piano exercises for five days enhanced the area of the brain relating to the digits. More remarkable is that just imagining the movements creates a comparable change in the brain, a measurable physical change.11
Since we can demonstrate that imagination does change the structure in the brain, then it becomes more believable that an altered state can generate other paranormal phenomena. The ability to control pain and resist burning that firewalkers and hypnotized people display may be a natural, though seldom used, potential of the mind-body connection. Parapsychologists Russel Targ and Jane Katra say that the interconnectedness demonstrated in quantum physics is the explanation for psychic abilities like remote viewing and distant healing.12 Our ability to control our brains and minds puts us in touch with the experience and phenomena of no separation. This is essentially the same thing the mystics have been reporting for thousands of years, that the separation between mind and body, between ourselves and others, even the phenomena of space and time, are illusions. Fehmi’s attention training along with meditation and other consciousness altering practices may be more psychologically and physiologically powerful than we’ve believed. Targ and Katra say, “The choice of where we put our attention is ultimately our most powerful freedom. Our choice of attitude and focus affects not only our own perceptions and experiences, but also the experiences and behaviors of others.”13
If you’ve been using your attention to alter your awareness while reading this article, you may have a sense how easy it is to shift your consciousness. Your experience may seem totally unlike the possession trance of a firewalker or a shaman, but it is related. It’s only a matter of degree. If you can fully appreciate the value of these milder controlled states, you may be more open to the value of states more alien to you, more altered. Those more extreme states have been used for millennia by indigenous shaman and healers to fulfill valid personal and social needs. Even scientists like Edison and Einstein used their ability to slip into natural trance states for creative breakthrough. Einstein even said some of his formulae were not derived from research or calculation, but from, “psychical entities as more or less clear images.”14
Many meditators, hypnotic patients, and open focus practitioners who use these ASCs report they feel more in control of their lives. Their direct experiences from these states gives them a flexibility that loosens the hold ‘consensus trance’ has on their minds. A century ago William James said, “the mystical feeling of enlargement, union and emancipation has no specific intellectual content whatsoever of its own... We have no right, therefore, to invoke its prestige as distinctly in favor of any special belief.”15 The work of these brain and mind researchers is helping us to understand without needing to believe; both the physiological and the psychological knowledge we possess has value. It is freeing to realize that we need not be believers or skeptics but can explore our states of consciousness with a more flexible and clearer mind. We may even enjoy and even be surprised at what we find.

Patrick Marsolek is a hypnotherapist and director of Inner Workings Resources. He teaches classes in self-hypnosis, intuition and remote viewing. Contact Patrick.